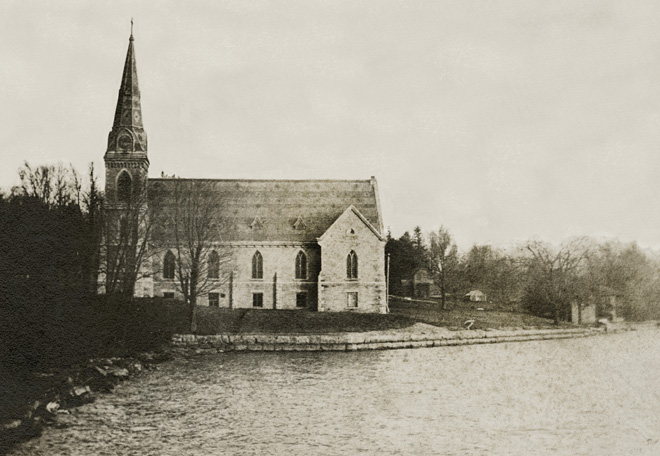 The present home of St. James’ Episcopal Church was built in 1873 and the sanctuary was enlarged in 1901, which dates the photo above as pre-1901. What will become F.C. Austin Park is still wild, with no breakwall.

The church after the sanctuary was enlarged, with the Tiffany window facing west. In the foreground, two men on the dock behind Legg Hall, with the roof of Joel Thayer’s boathouse visible on the left. 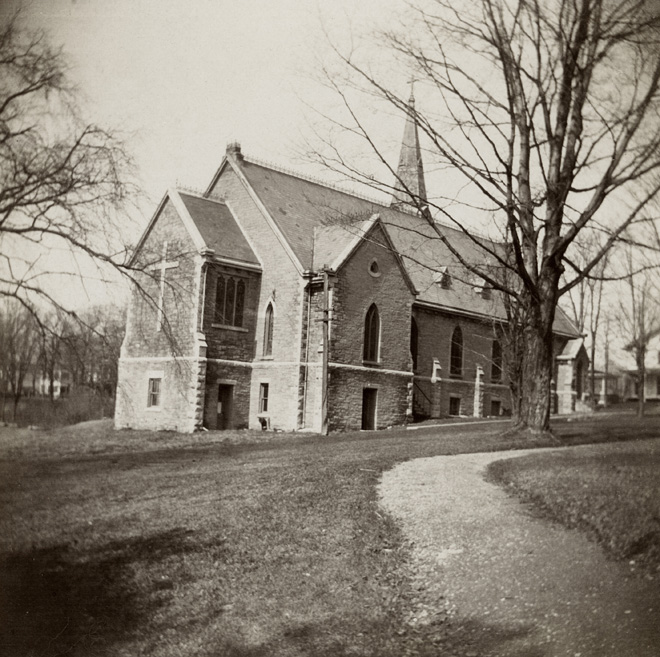 The back of the church. There are power lines, but steps still lead to the carriage entrance on the northeast corner of the church. 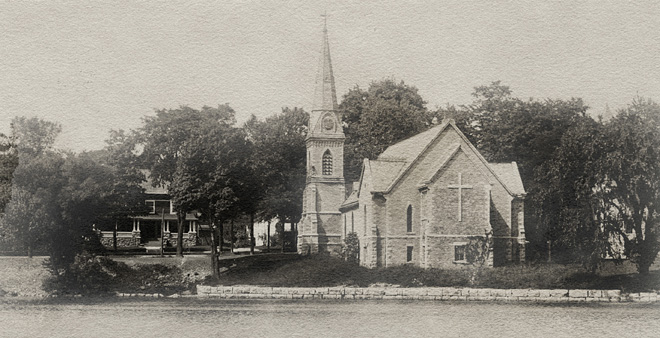 The land to the west has been cleared, but there is still no breakwall (built in 1935). The Weeks House, built in 1902, is visible across Genesee Street, and may have been occupied by the Hawkins family when this photo was taken.

The discovery (thanks to the keen eyes of Jason Armijo) of John Packwood’s signature in chalk on a stairway undergoing renovation at the Sherwood Inn is summoning up memories of the man who built the present-day Inn in 1871, and signed his work for a future generation.

John Packwood was born in Bedfordshire, England, on April 2, 1824, the son of William and Hannah Swift Packwood, and immigrated with his parents to the U.S.A. aboard the Courier in May of 1830.

The family settled in Auburn, N.Y. At the age of 18, Packwood apprenticed to a blacksmith in Amber, but after only a few months he moved on to Skaneateles to learn the trade of carriage blacksmith under John Legg. In 1847, Packwood was wed to Amanda King of Niles, N.Y.

In 1855, after learning his trade, Packwood began his own carriage manufacturing business with William Stacey on Railroad Street (now Fennell Street). Stacey retired the next year, and L.S. Worden took his place; the partnership was known as Packwood & Worden until 1859, when Packwood became the sole owner.

In 1865, Packwood bought property on Genesee Street, where Shotwell Park is today, for a new building, as well as the hotel property (today’s Sherwood Inn) across the street.

In 1865, the Syracuse Standard noted:

“In the western part of the village is the carriage factory of John Packwood, a large, three-story brick building. He employs from twenty to twenty-five hands in making carriages, sleighs, wagons and bob sleighs, of all descriptions, and produces from twenty-five to thirty thousand dollars’ worth annually. The pay-roll will average about one thousand dollars a month.” 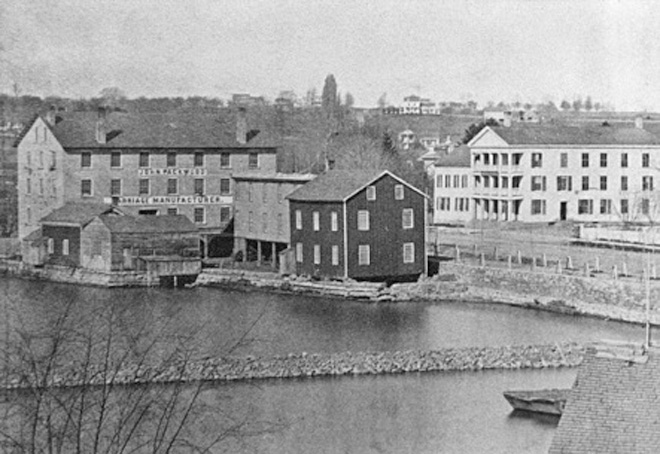 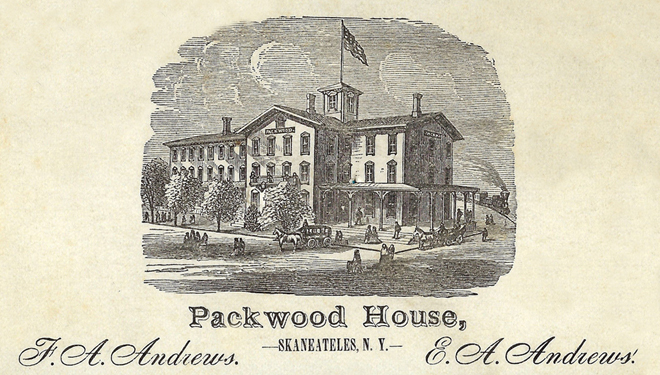 Packwood’s carriages continued to be shipped to all parts of the country, and the Syracuse Journal of September 8, 1881, reported that Packwood was “filling an order for five buggies for parties in Australia and New Zealand.” Unfortunately, the market for hand-crafted carriages was shrinking as mass production lowered costs.

“He continued the carriage business with varied success, the property in the meantime passing out of his hands in a series of financial reverses. The brick building was torn down in 1888, and the older buildings removed. After over forty years residence and over thirty years business career in Skaneateles, in 1886 he moved to Syracuse and established a carriage shop in Clinton St., but was unsuccessful, and in 1888 moved to Auburn, where he conducted a shop on Dill St., until his death.

“At one time, Mr. Packwood was the possessor of a modest fortune, which was swept away by business reverses. He was a man of kindly heart and generous impulse, and in his day did a large business in this village.”

John Packwood died on July 12, 1890, at his home on Lawton Avenue in Auburn. He was survived by his wife, Amanda, daughter, Mary Jane (Mrs. D.S. Dillingham), and two sisters. He was buried in Lake View Cemetery, Skaneateles.

“Jason Armijo finds a historical signature while restoring the stairs at the Sherwood Inn.” Photo by Jennifer Carter. https://www.facebook.com/sherwoodinn/ 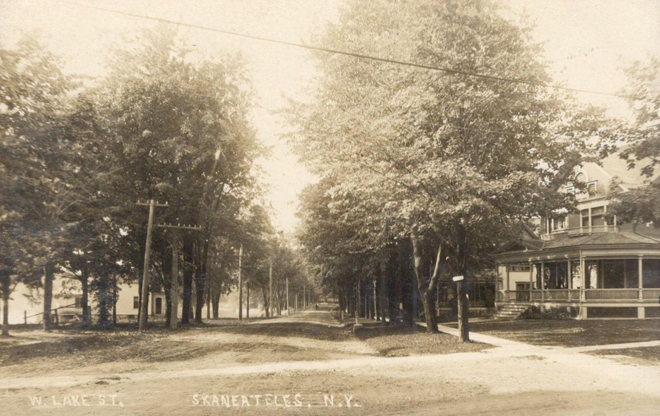 West Lake Street seen from Genesee Street, with what is today The Lady of the Lake B&B on the right. Love the hitching posts and stepping stones along the edge of the street. 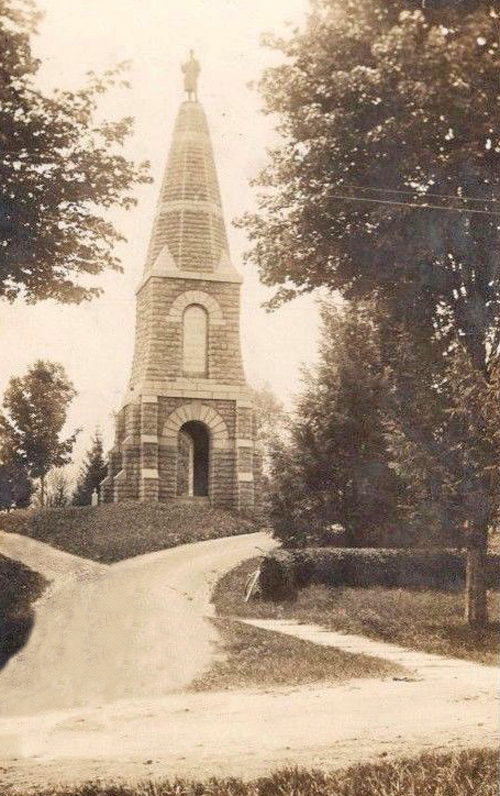 Love the photographer’s bicycle in the center of the photo.

Skaneateles
Create a free website or blog at WordPress.com.