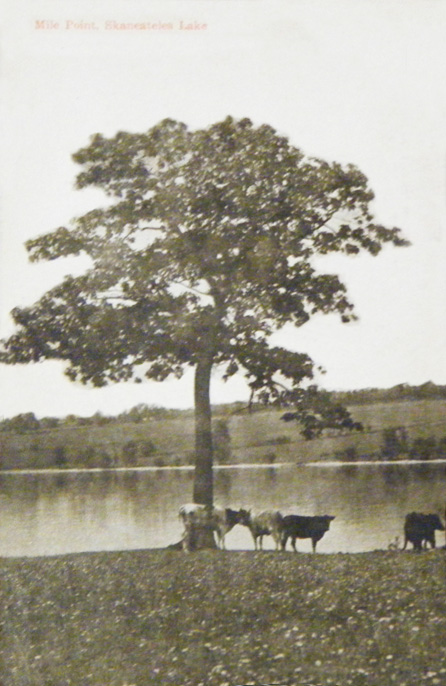 Advertising card for launches built by Skaneateles Boat and Canoe, with thanks to Bill Hecht. 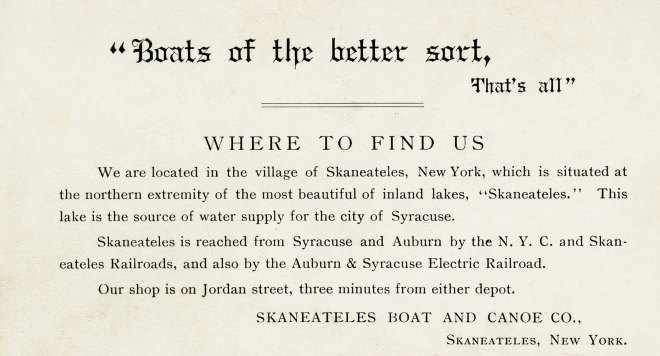 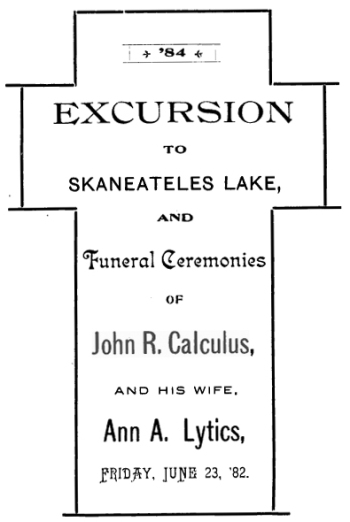 Some time ago, I came across this fragment among notes at the Creamery Museum of the Skaneateles Historical Society:

“The class of ’84, Syracuse University, buried Calculus at Skaneateles. About one hundred happy young men and charming young women took passage on the 10 a.m. train on the Auburn road, and after a pleasant ride to Skaneateles, a steamboat sail to Glen Haven followed, where a few hours were spent socially. On the way back to the village, a black velvet casket containing the remains of ‘John R. Calculus’ and ‘Anna Litics,’ his wife, was borne through the crowd, and, arriving at Skaneateles, was blown skyward, not to appear until Judgment Morn.  F.R. Walker delivered the eulogy and the ceremonies were closed with a mournful dirge. Music was furnished by [Joseph] Riano’s band, and so satisfactory was it that the same musicians have been engaged for a similar occasion next year.”

The first “Calculus Burial” at Syracuse University was celebrated in 1873 by the class of ’75, on the campus; the oration was delivered by N. M. Wheeler. Two years of math were required for liberal arts students; they hated it and were happy to be rid of it. Hence the elaborate farewell. Such funeral rites for math books were not unique to Syracuse; they went back at least to 1843 when students at Yale began burying Euclid (i.e., texts for Euclidian geometry). By the time S.U. sophomores took up the tradition, it was being observed one way or another at Amherst, Bates, Bowdoin, Dartmouth, Lafayette, Lehigh, RPI, Stevens, Trinity, and the University of Rochester.

And these ceremonies were not simply thrown together. Students printed invitations and programs, wrote speeches and songs, designed costumes and backdrops, hired musicians, paraded by torchlight and capped the evening with fireworks.

In 1876, Calculus was buried at Oneida Lake, and the next year, the Calculus burial first took place at Skaneateles Lake. This 1880 report from The University Herald gives one a good idea of how the Cremation of Calculus grew from a simple ceremony on campus to a day-long event:

“On the 25th of June the excursion of the Sophomore class to Glen Haven, Skaneateles, took place, and the funereal rites over the remains of the deceased Gen. Calculus and his wife, Anna Lytics. The excursionists, consisting of the members of the class with their friends, about one hundred in all, left the Central depot at 10 a.m. on the regular train for Skaneateles. It was a merry party that occupied these two cars as the train steamed out of the depot. The hopes of every one were high, as the day gave promises of being a pleasant one, and was not one of those fiery days which we had been having. 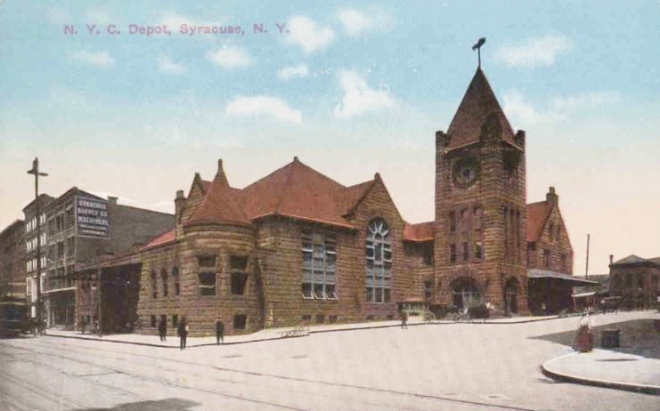 “Although the party had prospects of being dampened, their spirits were not in the least affected when, after being switched off at Skaneateles Junction, and while being drawn up the winding valley along the outlet of the lake toward the village of Skaneateles, the rain beat in torrents against the car windows. The rain did service in cooling the atmosphere, but was most too severe on those who plodded their way from the depot to the Skaneateles hotels, or patiently waited under umbrella and waterproof for the sun to shine once more.

“The rain was over before all the party were on the boat, the Glen Haven, which was to carry them up the lake. The trip up the lake was a beautiful one, and one long to be remembered by those who participated in the pleasures of the day, enjoying the exhilarating breezes of the lake and the beautiful scenery along the shore. The five hours at the Glen were spent by some in boating, when the occasional showers did not drive them ashore, by others in rambling along the shore and up the hill among cascades and waterfalls, and by others still in dancing to the music of [Otto] Drescher’s orchestra. 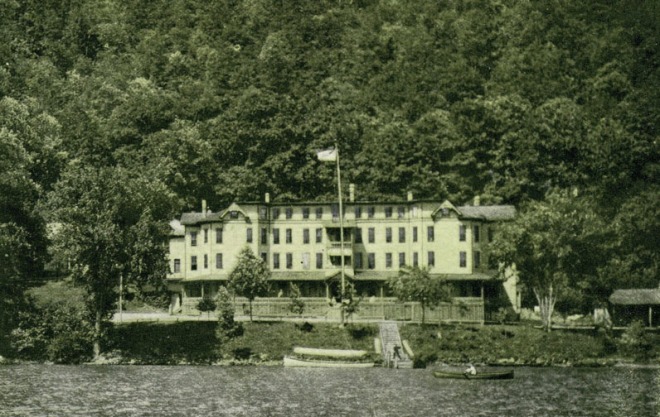 “After a supper at the hotel the party returned to the steamer, and at 8 o’clock started on the return down the lake; and when the excursion reached the dock at Skaneateles a little before ten, where the cremation of Calculus was to take place, they found the dock thronged with a crowd of spectators from the village, who had come to witness these last sad rites. The pyre, which was a short distance from the dock, was surrounded by members of the class in small boats, who with their weird, fantastic dress resembled beings from another world, as with groans and howlings they hovered around the burning remains of their old companions, Gen. J.R. Calculus and his spouse, Anna Lytics.

“The exercises opened with a dirge by the orchestra, after which the torch was applied to the combustible pile and the orator, Olin R. Howe [Class of 1882], rose and spoke of the good and bad qualities of the deceased, and of the grief and joy with which they thought of his death. The oration was distinctly uttered so as to be heard by all, and called forth a hearty response from the circle of boats in the form of groans and other demonstrations of grief. After the orator had ceased to pour forth his eloquence the party joined in the following song which they wailed to the tune of Antioch:

“In the equation of school life,
We found one constant term;
Which came at half-past eight, A.M.,
And made us writhe and squirm.

“Integrate it as we would,
‘Twas of no earthly use;
Its functions paralyzed the soul
And with us played the deuce.

“But now we’ve ducked old Calculus,
As-sined him to the deep.
We’ve cubed his modules of life
And laid him down to sleep.

“No more will parabolic curves
Perplex the Soph’more’s head.
We’ve reached our maximum of joy,
OLD CALCULUS IS DEAD.

“The moon rising on the scene and shining upon the lake and upon the weird company gave a beauty and grandeur to the whole scene. The excursionists arrived in the city at 1:15 the following morning, a somewhat sleepy-looking crowd… Praise is due to the class and its officers for the manner in which the whole affair was managed. Much of the success of the excursion is due to the manner in which Mr. [Porter] Tremain, Assistant Superintendent of the road, and Mr. [Frank] Albin, captain of the boat, did every thing which they could to satisfy all and make the excursion a success.”

In 1886, however, the tradition almost came to an abrupt end; the Syracuse Standard reported:

“With Pomp and Fireworks: The Observance of the Last Rites Comes Near Precipitating a Funeral in Dead Earnest

“Calculus burial to Syracuse undergraduates has become the day of all days in the collegiate year. Coming as it does on the day following the term examinations, when the average student is wearied from overwork in making cribs, this recreation is almost indispensable to restore the mind to a healthy condition. At 10 o’clock yesterday morning more than 100 of the gayest of all gay Calculus mourners left the Central station on the Auburn road to carry the remains of Calculus XV to their final resting place at Glen Haven. The excursionists occupied three special coaches, and at Skaneateles Junction they were taken to Skaneateles by an engine in waiting.

“The steamer Glen Haven carried the company up the lake, and at 1:30 o’clock the party was comfortably arranged in the new hotel, a model summer resort. The afternoon was spent in boating, in exploring the glen, and in enjoying with the girls the gentle swing of a hammock stretched under the branches of a shady tree. At 4 o’clock a lively waltz from Astrello’s orchestra of this city called together those who desired to dance, and soon the large dancing floor in the hotel was filled with the hard working students, all doing their best to make the day a success.

“From 6 until 8 the body of the deceased rested in state upon a magnificent bier, and many of the bereaved class during that time took a long and last farewell of the departed. But the dancers kept on dancing as it were to forget their grief, nor did they stop until the summons to the banquet hall. This call is always obeyed by Calculus excursionists, nor were they in this case disappointed.

“At 8 o’clock the mourners in white robes gathered around the casket out on the lake, and after a solemn dirge by the orchestra, Fred D. Leete pronounced the funeral oration. He dwelt upon the ‘constant’ qualities of the deceased, and upon the great ‘value’ he had been to the class in the most feeling matter. The speaker was frequently interrupted by heartrending groans from the mourners’ boats. After the oration, fireworks began to light up the lake while the body of John R. Calculus was fast being reduced to ashes.

“But after a few rockets had been discharged and a quantity of Greek fire had been burned, the entire mass of fire works, consisting of many superb pieces, ignited from a spark, and in a moment the boat from which they were being fired was a mass of flames. N.E. Hulbert and E.C. Mason were compelled to jump into the water, and after swimming for thirty feet they were rescued by B.W. Dodge and Harry Klock.

“The return trip was uneventful, the customary college songs were sung all the way home, and the merry mourning party returned at 1 o’clock this morning tired, but ready to affirm that Calculus burial is the best day of the year.”

In 1887, the cremation of Calculus returned to Skaneateles Lake, possibly with less emphasis on pyrotechnics. And the ceremony was held at Glen Haven again, from 1890 to 1894. It is possible the tradition died out or was replaced by another, or that math was simply no longer required of liberal arts students. But for more than 20 years, Skaneateles was very much a part of many Syracuse sophomores’ college experience.

I wish I could tell you more about this; it appears to be a Skaneateles brass band assembled outside the old firehouse, at Jordan and Fennell streets.

This 1905 postcard from the Rotograph Co. identifies this image as “Coopers Point.” Given that Henry Cooper built a cottage on the lake shore in 1902, and that Cooper’s Point was said to be nine and one-half miles from the village in 1911, I’m thinking this may be the site of The Pines, which is said to be about 8 miles south of the village. But I could be wrong. Any suggestions would be welcomed.

Chestnut Cottage at Glen Haven, from a postcard published by the Glen Haven Hotel, no. 7 in a series; also credited, Walter S. Bull & Co. Walter was the son of J. Seaman Bull of Cortland, N.Y., who managed the hotel property until his death in 1916.