The Skaneateles Festival has brought many composers to the village, but can any match the fame of Henry Tucker?

Born on December 13, 1826, in Kingston, Ontario, Tucker grew up in Auburn, N.Y., and attended the Auburn Academy. He was partially crippled, able to walk only with the help of a cane, but he had an extraordinary gift for music. As a boy, he quickly learned to play the guitar, piano and organ.

He gave a concert in Skaneateles on January 4, 1843, when he was 16 years old. In 1848 and ’49, he lived in Geneva, N.Y., and served as the organist at the Reformed Dutch Church. In 1850 and ’51, he was living in Auburn again, and giving music lessons to pupils there and in Skaneateles. His own songs were first published as sheet music in 1850, and his “Kingston Waltz” became a best-seller when published in 1851. 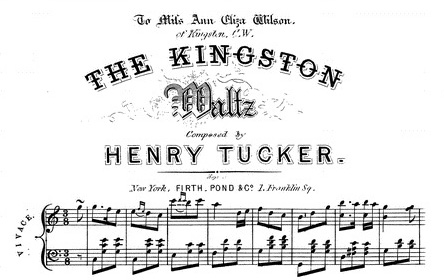 In 1852, he went to Albany where he taught vocal music, guitar and piano. In 1860, he moved on to New York City, and it was there that his career as a composer flourished as he wrote music in partnership with some of the foremost lyricists of the day.

So, too, was “Jeff in Petticoats” (1865), written after the fugitive President of the Confederacy, Jefferson Davis, was captured dressed in his wife’s clothing; Mr. Davis claimed he had mistakenly grabbed her sweater in a darkened tent when awakened by the arrival of his mounted captors, but Northern audiences wanted to believe Davis had become a drag queen to evade capture. Tucker’s song, with lyrics by George Cooper, was immensely entertaining. 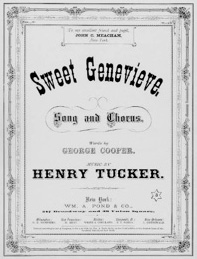 After the war, in 1869, Tucker penned his most famous, and most haunting, melody, that of “Sweet Genevieve.” This may be a good time to suggest that even though you may not have heard of Henry Tucker, you have almost certainly heard Henry Tucker. “Sweet Genevieve,” very popular in its day, came to signify an era in America, a place in time. As just one sign of its appeal: Between 1930 and 1958, the melody appeared in no less than 27 films.

You have been serenaded by Henry Tucker and “Sweet Genevieve” if you have seen any of these classic movies:  In Old Chicago (1937) with Tyrone Power, Alice Faye; Ball of Fire (1941) with Gary Cooper and Barbara Stanwyck; Life with Father (1947) with William Powell; John Ford’s Fort Apache (1948) with John Wayne and Henry Fonda; the steamy Peyton Place (1957) with Lana Turner; and my personal favorite, Guadalcanal Diary (1943) with William Bendix. Historical romances, dramas, comedies, westerns, war movies – the strains of “Sweet Genevieve” graced them all.

And not to be forgotten was the appearance of Tucker’s “Weeping, Sad and Lonely” in Gone with the Wind (1939).

S.H. Parker, editor of the Geneva Gazette, said, “There were soul and spirit in his organ voluntaries, a beautiful dream in his piano and guitar improvisations. If ever a mortal deserved a place among the angels for the production of so much that is beautiful and imperishable in art, Henry Tucker, in dying, is exalted with the cherubim.”