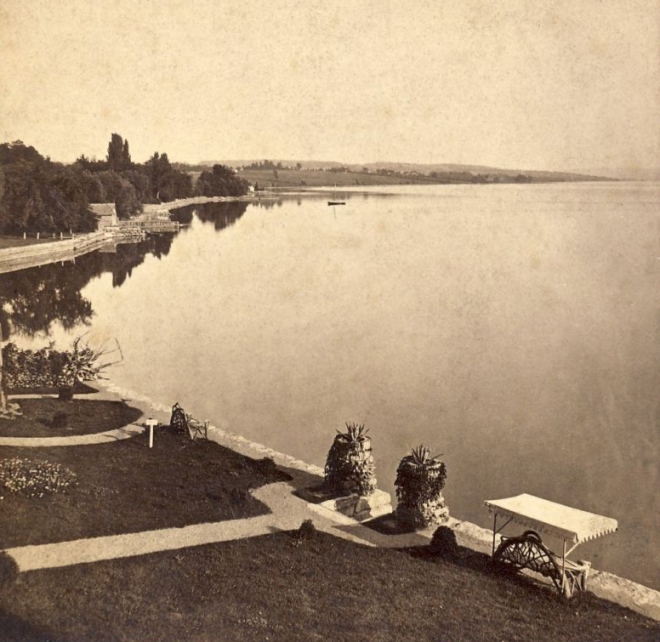 A photograph by O.H. Wildey of Thayer Park, one I’ve never seen before.

Brainard T. Munn started out well enough, born in Hawaii, “The Sandwich Islands” as they were known in 1838. He was automatically a citizen of paradise, and although it was January, we can be fairly sure it was not snowing.

Brainard’s father was Bethuel Munn (whose Christian name was taken from the Book of Genesis), who came to teach at Molokai’s Kalua‘aha mission station. Brainard’s mother was Louisa (Clark) Munn, daughter of Eli and Anna Clark of Skaneateles, where Louisa had been born on March 3, 1810. Louisa had married Bethuel on November 21, 1836, just three weeks before they embarked on the Mary Frazier in Boston, sailing December 14, 1836. They were a part of the “eighth company” of missionaries bound for the Sandwich Islands, and were at sea for 116 days, landing in Waikiki Bay on April 9, 1837.

Brainard was born the following January and when he was about 18 months old, he was joined by a sibling, Morrison Clark Munn. But less than four years in, Brainard’s mother became ill, and the family went to Honolulu where she could receive better care. She died on August 25, 1841, and was buried in the cemetery of the Kawaiahao Church, the mother church for the missionaries who came to the islands. Bethuel Munn, with sons aged 3 and 1, returned to the U.S. in April of 1842. On March 15, 1843, Bethuel married Harriet Bacon in Elbridge, and with his bride and two sons settled in Clyde, a village on the Erie Canal about halfway between Syracuse and Rochester. A year later, the couple was blessed with twin sons.

On June 23, 1846, Morrison Clark Munn died “very suddenly” in Clyde. He was six years old, and Brainard had now lost his mother and his brother. One of his step-brothers died in childhood as well, and in 1849, his father, Bethuel Munn, died. At the age of 12, Brainard Munn was a sole survivor. Harriet Munn moved back to Elbridge with Brainard and her surviving son.

In time, Brainard either moved or was packed off to Skaneateles, to live with members of his mother’s family. When he was old enough, he took a job on George Earll’s farm just south of the village. Brainard was said to be a fine-looking, well-built young man, and as young men do, he fell in love. The object of his devotion was the housekeeper at the Earll home, Kate Ryan, “a buxom and handsome Irish girl.” But she did not love Brainard in return; when she married another man and moved away, Brainard went off the rails.

He had lost everyone he’d ever loved, and now he wanted no one’s company. He left the farm, built a cabin in the woods to the west of the village, and began building a reputation as an eccentric. His rare visitors would find him reading, or filling sheets of paper with writing, and caring for nothing else.

In 1861, at the outset of the Civil War, he enlisted to serve on the “President’s Guard” in Washington, D.C., for three months, but quickly returned to Skaneateles and his hermit’s existence. He was drafted for military service in 1863 but paid a substitute to go in his place.

The first tangible evidence of his writing appeared in 1866: Our Crisis; or, An Impartial Examination of the Issues Now Before the American People was a 48-page pamphlet Munn had published under Munn’s own name by Dakin and Metcalf in Cambridge, Massachusetts, in which he set out a course for the United States following the Civil War, explaining “how a reconciliation can be best brought about, and how peace can be best maintained.”

This was followed in 1871 by Love on the Wing: A Novel, also published in Boston, but under the name “Charles March.” The pseudonym did no good. The village of Skaneateles was openly identified and its citizens were so clearly portrayed that there was no question who was writing and who he was writing about. The result was “a sensation,” and of course everyone in the village had to buy a copy to see if they were in the book.

The writing wasn’t half bad. That would come later.

In Love on the Wing, women fell into two classes: good women who die and vixens who live. This is one of the milder passages:

“It was a beautiful afternoon in June that she stood upon the piazza, carelessly watching the clouds as they chased one another across the sky, at the same time nervously whipping the leaves from a lilac bush which stood close by. She was attired in riding dress, with jockey hat and plume, which hung heavily over the left shoulder, and the long trail she held upon her left arm, and a silver-mounted riding whip in the other. Her hair was of a rich golden color, and braided into a heavy chignon. Her eyes were of deep blue, over which arched a beautiful and commanding brow; her nose small and straight, her teeth of pearly whiteness, while her lips were fashioned in Nature’s most perfect mould; her chin small and dimpled, and a rich, beautiful crimson mantled her cheeks, and her face was small, round, and full. In her bosom – which throbbed with all the ardent passions of her nature – there beat a heart as proud and as fickle as ever beat in a human breast. She courted the admiration of every susceptible being; and when she had reduced him to submission, and at her feet, spurned him with the contempt he merited. She reckoned her conquests by scores; while all but one had laid their hearts at her feet, and which, by her, had been ruthlessly trampled into the dust.”

That was Sarah. One of her conquests was “Charles Spencer,” and even at the distance of 150 years, one can clearly discern Ben Porter, the village’s greatest war hero, who died in the Civil War leading the charge at Fort Fisher. In Munn’s novel, a letter to Sarah is found in Spencer’s pocket after his death, in which he writes:

“I shall volunteer to be placed in the foremost position of danger, that I may at the first discharge fall and die. Blame yourself for this. It is your cruel rejection which has caused it. My blood is on your hands, and you can never wash them white. I thought them once so pure and sweet, that I was glad to press them to my lips; but now, whoever kisses them will taste my blood.”

And that was just a warm-up. For Bridget O’Conor, an Irish girl – surely the Kate Ryan who jilted him – Munn dips his pen into a deeper well of venom. We are told that Bridget is “young in age, but old in viciousness and depravity of heart.” Her behavior is described as disgusting, horrid, shameful, brazen, infamous, outrageous, defamatory, villainous, dishonorable, unholy, ungovernable, vile, horrid, unsightly, and mean. She is a “wolf in the clothing of the gentle lamb,” a dark traitor, an assassin, a hypocrite, and a reprobate. All this in just two pages (pp. 233-234).

A good writer shows you that someone is evil; Munn just tells you, again and again. Nor was he big on building suspense. Chapter titles like “Sickness and Death of Flora” pretty much tell you what’s coming.

In 1877, believing the world was anxious for a sequel, he wrote and published another book, La Petite Belle; or, The Life of an Adventurer. This one is unbearable. Most writers will work out half a dozen ways to say something, and then use the best line. Munn included all six, assuming his readers were in love with his prose. They were not.

Abandoned by the reading public, in addition to everyone else in his life, Munn gave up writing. He donated all his books to the Skaneateles Library Association, and moved to Syracuse, where he worked as a carpenter. That didn’t go very well either.

In 1890, he sued a contractor, claiming that the amount he was promised for building a school house in Geddes had been misrepresented, and that he was being defrauded because he had not understood the language of the contract. The defense attorney asked him if he was not familiar with language, if he was not the author of two books, and then asked Brainard for the titles. When Brainard said “Love on the Wing,” everyone in the courtroom chuckled. When he added “La Petite Belle,” they laughed out loud. The defense attorney asked for dismissal, which the judge granted. Brainard Munn was literally laughed out of court.

In 1899, he was arrested in Syracuse for vagrancy and jailed because he did not have $2 to pay the fine. After serving his sentence he begged the judge to be allowed to return to the penitentiary. The judge granted his request, and Munn said he’d walk back, but the judge insisted he wait for the patrol wagon.

Eventually, Munn was sent to the Onondaga County Home, the house for the poor, where he spent the last 15 years of his life. In April of 1916, he was reported missing. Searchers found his hat, and then saw his cane floating near the bank of the Home’s reservoir. Using grappling hooks, men dragged the pond and found Munn’s body. No one claimed it, and it was sent to the Syracuse Medical College.

It was a far cry from Hawaii.

1) On December 10, 1907, the Hawaiian Gazette reported that a headstone had been found, a plain marble tablet, 24 inches high, engraved “In Memory of Mrs. Louisa, wife of Bethuel Munn, Missionary on Molokai, who died August 25, 1841, in the 32 year of her age.” The stone was found in a box under the floor of the former home of the Rev. Amos S. Cooke, the head missionary at the mission where Bethuel and Louisa had taught. The stone had been shipped to the mission, but Mrs. Munn was buried in Honolulu, and apparently its final delivery was an errand that could be put off for a day or a week, or a month, or 60 years.

2) Skaneateles was not alone in being scandalized by a novel. Cazenovia’s turn came in 1883 with Only an Incident, a novel by Grace Denio Litchfield, in which Cazenovia was too thinly veiled as “Joppa.” I’ve read a few pages; it’s quite well done.

Harvesting ice in the winter and storing it for sale in the summer was an important occupation in the 1800s. In 1864, for example, the lake froze over on January 8th, and ice cutting began on the 12th. Note the ice houses in the background, and the backs of the buildings on Genesee Street, many of them still there. The last winter for ice-cutting was 1929-1930. 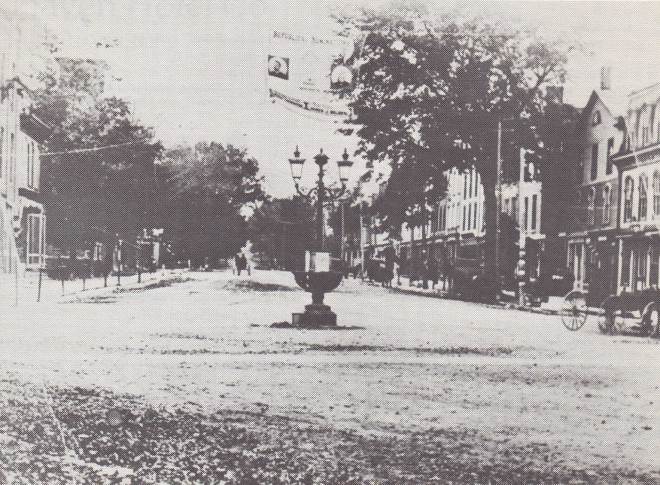 In August of 1895, the Women’s Christian Temperance Union of Skaneateles donated a public drinking fountain to the village, fresh water for both horses and men, the latter of which would presumably no longer have to slake their thirsts with strong drink. The fountain was planted in the intersection of Jordan Street and Genesee Street, but had to be removed in 1901 to make way for the trolley cars.

My thanks again to Gard Lorey for the loan of Pictorial History of Skaneateles (1980) from which these were taken.