“That’s only another way of saying you’re frightened. Oh, it was just the same in America! We were there for a fortnight, and twenty-three men tried to make love to me when they were too drunk to have any real interest in it, but only one had the guts to make a pass at me sober. He was a truck-driver, and asked me to go to Skaneateles. Well, I didn’t want to go to Skaneateles, but I was grateful to him for not being frightened.”

— Lucy Pettigrew speaking in Laxdale Hall by Eric Linklater (1899-1974). A British novelist, poet and travel writer, Linklater studied at Cornell during the winter of 1928-29.

Marian Agnes Stuart was the valedictorian and vice-president of the Class of 1916 at Skaneateles High School, and went on to Wellesley. On 27 March 1917, she wrote this essay about the village for her English Composition class:

“Only yesterday a friend said to me, ‘I adore Skaneateles.’ As she is not a superlative person who adores everything, she made me wonder about my little home village. Excitingly pleasurable things could never be associated with the place, so it must have been the spirit of it which she loved.

“Skaneateles is one of those conservative, aristocratic little towns, plentiful in the East. Altho it never openly boasts and would not think of advertising, it has the smug consciousness that in worthwhile matters it has the best of everything. It seems to me like one of its own middle-aged ladies of comfortable fortune and culture, who is superior to those around her. She gradually, with no conscious conceit but entire satisfaction, comes to feel that she is second to no one in the land.

“Young people never seem to belong. They are just visitors between college terms. The real inhabitants are those who have lived there long enough for their eccentricities to develop and crystallize.

“The hills, the long tree-lined streets, the mansions of the ‘summer people,’ the comfortable farm houses with grain fields stretching to the lake, the long narrow ribbon of intense blue, itself, each has a place in the consciousness of the village that it has an assured position.

“The townspeople have certain stories which they tell each newcomer — with no showing off but a desire to show the best side of the village. The librarian is one person who takes personal pride in the village. She is a round, slow moving person who provokes the younger generation to anger because she knows so little about the books. When a stranger comes, however, she is in her element. With a superior smile, she explains, ‘Yes, Ex-president Roosevelt has called this one of the most beautiful lakes in the United States. You know his cousin lives in that colonial mansion on the west shore. The lake has the purest water in the world, fed by perpetual streams, and a mile up the lake, they can’t find the bottom. You know, of course, that this is the only place except Seattle where teasels can be grown. It’s only a stupid little…’ The deprecatory remark subsides into a contradictory smile.

“The block of commonplace stores has crates and boxes dumped behind them. From the lake, however, the matter-of-fact places of business are glorified. The sun spreads a golden haze over the warm red and buff brick and the fire walls rise up to give a touch of the old world. From experience I know that this mellow splash of color at the end of the water sends a little thrill thru you. The village recounts with pride that these stores look like the little German villages on the Rhine. The village is perfectly neutral. If it delights to be compared to the old German Städtchen, it is equally glad to boast of a typical English church. The  little Gothic church of gray stone is back only a trifle from the broad maple-bordered street. Its lawn slopes back to the lake where the shore line is softened by feathery willows. The slender spire reaches up from the trees to call men to worship.

“Such are the charms of our village. Perhaps not the inner ones, for it would take years to appreciate the traits of the people. Yet while thinking of the little town of lake and hills, I have grown almost sentimental. I believe I ‘adore’ it myself.”

Miss Stuart eventually married the president of the Class of 1916, Kenneth Holben. Although they spent most of their married life in Baltimore, Maryland, they returned here to live year-round in the 1960s. My thanks go to their daughter, Sally Holben, who shared this essay and the photograph of her mother, circa 1916, and who notes that Städtchen means “little village,” adding that the Skaneateles High School had a strong German department.

The first printing of 500 has sold out, and half of the second printing of 300, which arrived on Thursday, is already spoken for. However, they are back in stock at Creekside and the Creamery. And it’s available via Amazon.com. My thanks to everyone who has been kind enough to buy a copy; I’m delighted that so many people are enjoying this.

Genesee Street from the east looking west. If you look at the storefronts on the left, you can see a giant scissors hanging out from the second story of one of the buildings, probably indicating a tailor’s shop. 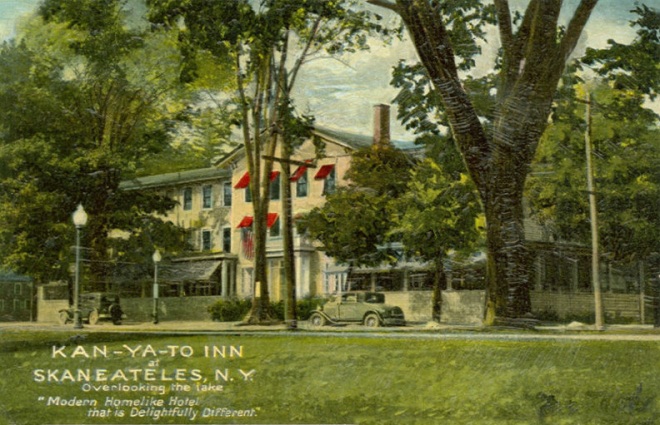 I have seen this postcard in its black & white incarnation, but never before in this tinted version. So green, with such lovely red awnings. Hail to thee, “Modern Homelike Hotel.”

“My impression was that a picnic party on a Skaneateles steamer shouts no more, keeps better time, breaks into truer harmony and sustains the parts better than any group of singers we heard in Germany.”

Mr. Taylor’s comment appears to have been prompted by a Sunday evening supper in Munich, when his table was surrounded by beer-drinking, smoking singers.